Love Your Neighbor As Yourself

God's Will Be Done - With or Without You

C.S. Lewis once said, “For you will certainly carry out God’s plan, however you act, but it makes a difference to you whether you act like Judas or John.” This curious saying is highlighted quite clearly in today’s difficult gospel lesson from Matthew. 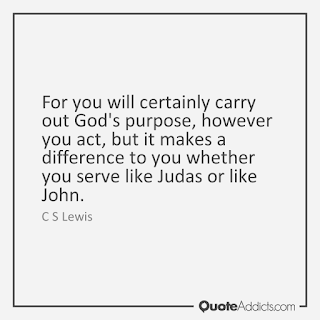 One of my favorite prayers is found in a service called Compline. The last line of the prayer says, “shield the joyous.” As the father of two young children, this prayer has become especially meaningful in recent days. For now, my children are living in a world where there is no gunman who murders 59 people and injures 500+. For Mary Katherine, tragedy looks like not being able to stay at the Fair for another thirty minutes.
I know that the cruel reality of the world will shatter their reality soon enough. I still remember that sinking feeling in my gut as I watched news reports out of Columbine where two students murdered thirteen other students before killing themselves. I was a freshman in high school and was confronted with the terrifying thought that something like this could happen at my school.
Since then, I feel like this kind of news has become almost routine. I have moved beyond feeling shocked when something like this happens. Humanity and human sin is more destructive than we can possibly fathom. This is a terrible feeling especially as I think about the future of my children.
What if their reality is so filled with acts of violence and evil that it seems commonplace? What happens when I can no longer shield them from evil and hatred? What will I say when their heart breaks the first time the world disappoints them? As Mr. Rogers once said, I will tell them to look for the helpers. Look for the people who risk their lives for the sake of another.
But what will I say the tenth time the world disappoints them? As much as I’d like to tell them to keep trusting in the goodness of humanity, it is growing more and more apparent to me that, despite our best efforts, the goodness of humanity is not capable of ridding the world of evil – at least not on our own. We are too prideful. We are too married to our own ways and own ideas. At least, I know I am.
However, I do trust that with God’s help we can start to convey a different reality amid a broken and sinful world. And that reality becomes real when we look at our children. Jesus said, “Let the little children come to me, and do not stop them; for it is to such as these that the kingdom of heaven belongs.” 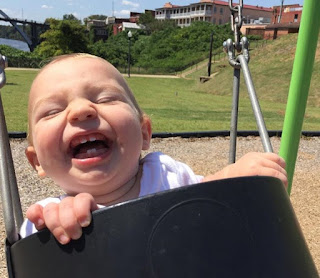 Our children - the joyous - remind us of the way the world should be.  Most of our children are living in a reality that is filled with hope and possibilities and joy. God was on to something when he chose to come into this broken and sinful world as a vulnerable, giggling baby boy.
When I look at children, my heart changes. I become softer and more kind. I can let go of my arrogance and pride – the things that give birth to sin and destruction. I become more willing to compromise and give up doing things the way I’ve always done them.
When I hold my son John, I discover that John is the one who is holding me in love. In this moment, my life is not so much shaped by my own needs but the needs of my child.
Jesus invites us to hold the children of the world close so that we may be held by a love that makes the world a more joyful place – a love that is not passive or silent in the face of hatred and violence, a love that turns swords into ploughshares, a love that puts into action the faith we proclaim, a love born out of the goodness and mercy of Jesus Christ our Lord.
Shield the joyous not just for their sake but for the sake of the whole world.

Keep watch, dear Lord, with those who work, or watch, or weep this night, and give your angels charge over those who sleep. Tend the sick, Lord Christ; give rest to the weary, bless the dying, soothe the suffering, pity the afflicted, shield the  joyous; and all for your love's sake. Amen.
Posted by The Rev. Jack Alvey at 9:25 AM 2 comments: