"For everyone who asks receives, and everyone who searches finds, and for everyone who knocks, the door will be opened.”
Written on the heels of the Lord’s Prayer, this famous passage is most commonly used in relationship with our prayer life. Often times, this scripture is translated, if you pray hard enough and long enough, God will answer your prayers.  Has anyone ever suggested to you that if you just pray hard enough, God will grant your request?
While I am a big believer in the power of prayer, I am forced to consider the implications of this type of reading when prayers are not granted.  What about the couple who prayed for years and years for a baby but never to any avail?  Do we just say, “It must not have been God’s will?” or “God must be punishing them for something”?
What about the young mother, devoted to her church and family, who dies after a battle with cancer?  Were the prayers of her church family not enough?  Was her faith lacking?
For two years, I prayed every night for my father when he battled Major Depression. Every night for those two years I asked God to make him better.  And every night I felt as if my prayers fell on deaf ears.
After my dad lost the battle to this terrible illness, I was sure that my prayers did indeed fall on deaf ears.  Did I not pray hard enough and long enough?  Was I not pious enough in my asking?  I know you have a similar story to tell, too.
Episcopal priest and writer, the late Robert Capon comments on this famous passage saying, “Taken literally, as a program for conning God into catering to the needs of our lives, that is pure bunk: too many sincere, persistent prayers have simply gone unfulfilled.” 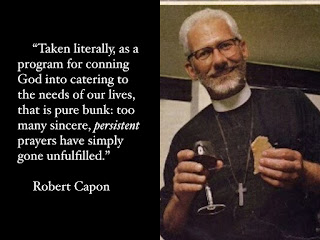