Get Up; Do Not Be Afraid 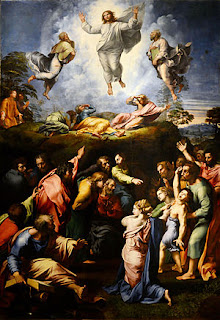 
Beloved, it is time again to come down the mountain and walk in the way of the cross as we begin the Lenten Season.  But fear not and don’t miss our transfigured Lord Jesus Christ who desires to meet you, touch you, and give you courage this day to face the season of Lent, face the way of the cross with a posture of hope and not fear.  Amen.
Posted by The Rev. Jack Alvey at 9:20 AM No comments: 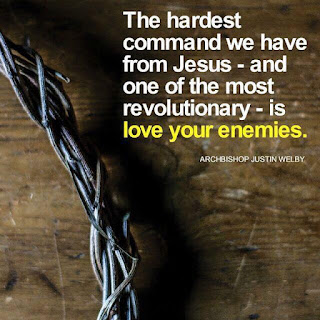 Which reminds me that God did figure out a way to quarantine evil.  God did figure out how to draw evil to one spot and defeat it.  But God doesn’t defeat evil with kind of instrument of war that we humans have ever tried.  God defeats evil through a radical kind of love that embraces even the enemy.
Think about it – the ministry of Jesus draws all evil out into the open – beginning with Satan, then the Roman empire, the Jewish establishment, and eventually the evil that exists inside the hearts of even his closest followers.  Ultimately, the evil powers and forces of this world combine to put Jesus on the cross.
At any point Jesus could have called on the power of God to rain fire down on these evil doers like the prophets of old did, but he didn’t for Jesus knew he would destroy God’s entire creation if he took that route.
Instead, Jesus looked evil in the face and said, “do your worst.” Even more profoundly, looked at the sea of humanity and uttered those famous words, “Father, forgive them for they do not know what they do.”
And this is the moment when the whole world is saved from the totality of sin and death; this is the moment when the true instrument of salvation, the instrument of unending love breaks into this world and saves humanity from total despair; this is the moment when a glimmer of hope starts to shine in the darkness.
Jesus on the cross is where God makes space for us to first recognize the horrors that humans bless.  And from here God begins to move our hearts to love even the enemy and those who wish us harm because on the cross Jesus shows us that love of the enemy is what brings salvation to a world that will otherwise destroy itself.
Beloved, do not be afraid to be perfect as your heavenly Father is perfect. The good news tells us that Jesus has come from heaven to earth to create space in this world, space at the foot of the cross for all to come and know the healing power of God’s love.  And as Christ’s hands and feet in the world, go forth into the world and make space where all – even the enemy – can come to know God’s salvation story through the sacrificial love of Jesus Christ.  Amen.
Posted by The Rev. Jack Alvey at 1:01 PM No comments: