"Just as the living Father sent me, and I live because of the Father, so whoever eats me will live because of me." Before the days of social media, the church’s best marketing tools were t-shirts. Episcopal students at the University of Georgia created one of the more provocative church t-shirts when they translated the before mentioned verse into “Eat me.” 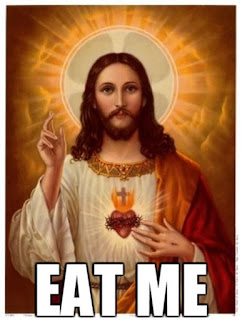 God Helps Those Who Cannot Help Themselves

Benjamin Franklin once said, “God helps those who help themselves.” Like most Episcopalians during that era, Franklin was a self-proclaimed Deist. As a Deist, he believed that God created the universe but does not involve himself in earthly affairs. He believed it was up to us as to whether we sink or swim. I will, without God’s help.
Franklin was brilliant for a lot of reasons, but I’m afraid he got this one wrong. Like Thomas Jefferson, another nominal - Episcopalian, Franklin and other Enlightenment thinkers, influenced by Thomas Paine’s Age of Reason, omitted the parts of the Bible that spoke of divine intervention. And when you take out all the parts about divine intervention, you are left with a message that proclaims, “God helps those who help themselves.” 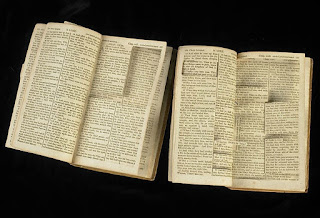 Jesus answered them, “Very truly, I tell you, you are looking for me, not because you saw signs, but because you ate your fill of the loaves.”
During my time in Birmingham, a colleague and I started Church in the Park at Linn Park. Before we launched the ministry, we canvased the crowds in the park, most of whom were homeless, to see if there would be any interest. Almost all the people we talked to said the ministry would only be successful if we served lunch after worship – one guy was very intent on bologna sandwiches.
I recalled this particular text from John and thought to myself, “Do they not understand we are serving Jesus, not food?” The more I reflected on the comment, however, the more I realized I was really no different.
I went to Bible study in 7th grade because there were Krispy Kreme donuts. I went to Happening because I knew I could eat all the candy I ever wanted. I went to church every Sunday in college because I knew a free dinner awaited me following the service. I became a priest because I knew I would never have to pay for lunch ever again (just kidding)!
There is no doubt that food, especially free food, draws a crowd. Translating the refrain from Field of Dreams, if you have food, they will come. While food is essential for both our physical and mental health, there must be something more to sustain our spiritual health. As someone said, there must also be soul food.
Jesus has no problem gathering the fold into the flock with a free lunch, but Jesus is clear that a free lunch is not the end game. Jesus hopes the crowd will see beyond food. Jesus says, “do not work for the food that perishes, but for the food that endures for eternal life.” – that we might pass through things temporal and not lose the things eternal.
Jesus hopes the yearning for a Krispy Kreme donut turns into a yearning to know the fullness of God. Jesus hopes the thought of never ending candy turns into the thought of knowing a love that never ends. Jesus hopes the appeal of a free meal turns into an appeal that says, Lord, have mercy – a mercy freely given by our Savior.
All of this is not to say that God does not care about our temporal reality. In fact, God cares so much about our temporal reality that God is willing to take on our frail flesh and die for us. God knows that this temporal reality so often blinds us to God’s eternal reality, and God’s mission is to reorient us toward that eternal reality through Jesus of Nazareth – a human being just like you and me.
God is not devising an escape plan for all the holy people stuck on earth. Rather, God is sanctifying us through Christ so that this temporal life might reflect the things eternal - thy will be done on earth as it is in heaven.
It’s not that this temporal world is bad. After all, God looked at creation after the first generations and said, “It is very good!” And then God told us to take care of this world. But instead of taking care of this world, instead of taking care of each other, instead of trying to find the divine life in all things, we fall into the temptation of consuming the things of this world with little regard for the sacredness of it all.
Things start to go sideways when we use this world to serve our needs instead of serving the needs of the world. And so, here we have this Jesus who calls us to see the world from a different point of view by giving us the vision of the kingdom of heaven on earth – a vision that calls us to pursue the things eternal.
Jesus says, “seek ye first the kingdom of God and his righteousness and all these things will be given unto you.” And the paradox of it all is that when we pursue things eternal, we are content with our temporal reality – we realize we have all that we really need.
When I say, we realize we have all that we really need, I do not mean that we will get everything we ever wanted. I do not mean we will get all the material things American culture tells us we need in order to lead a life worth living. I don’t mean everything in life will work out like we hope.
Rather, I mean when we pursue the things eternal, we are no longer so attached to the earthly things we think we need for fulfillment, we are no longer so attached to the temporal things our culture puts so much value on.

Speaking of things our culture puts so much value on, did you know that Apple just became the first American company to exceed $1 trillion in value? This isn’t really that surprising though. The Alvey household shares two Apple TVs, a Mac desktop, and an iPad. We’ve also owned a number of iPhones and iPods over the years. Once you buy one of their products it’s almost like you are sucked in for life. At some point, it’s like you can’t live without Apple products.
Imagine for a minute if our culture was as invested in the kingdom of God as we are in Apple products. Imagine for a minute what our world look like if our worldview was guided as much by the kingdom of God as it is by the worldview Apple products open us up to?
Studies show that people don’t buy Apple products because they offer the best technology. Many would even argue that Apple does not offer the best products. Instead, people buy Apple products because it is a way of life. Buying Apple is a lifestyle.
I think the church should take a tip from Apple. Instead of trying to offer new and improved products and services, we should be offering a different way of living – a lifestyle modeled after Jesus and his followers.
Jesus didn’t come to offer new and improved products for a better life. Jesus isn’t peddling goods that guarantee health, wealth, and happiness. Instead, Jesus is offering a way of life that opens us up to God’s eternal reality in the here and now. Jesus is offering a way of life that models the kingdom of heaven on earth, a kingdom where all are valued and cherished as beloved children of God.
Before we were called Christians, we were called People of The Way. We were called people of The Way because our lives were so radically different from the consumer culture around us. We associated with the sick and lowly. We advocated for the widowed and orphaned. We gladly gave up whatever earthly treasures we had for the sake of the kingdom of heaven – for the sake of the community of God. We compelled people to follow Jesus not by what we had to offer but by the way we lived.
Beloved in Christ, may we live for this true bread from heaven, may we live for the way of Jesus, may we live for the kingdom of heaven and may God bless us and fill us with all good things through the changes and chances of this life until we rest, at last, in God’s eternal changelessness. Amen.