When Happiness and Christianity Don't Mix

If you’ve been to any of my Episcopal 101 classes, then you’ve heard me talk about Moralistic Therapeutic Deism.  I know that is a mouth-full but the term describes the five-basic spiritual and religious beliefs of young people today.
These beliefs are based on extensive research and documented in a book entitled Soul Searching: The Religious and Spiritual Lives of American Teenagers.  As a side note, I don’t think these tenants apply solely to American teenagers.  One of the five tenants of Moralistic Therapeutic Deism states, “the central goal of life is to be happy and feel good about oneself.”
Now, I don’t believe there is anything wrong with the desire to be happy in and of itself.  But pay attention to the times when your happiness comes at the expense of someone else’s misery.  Pay attention to all the times when your desire to be happy conflicts with God’s desire for justice and truth.
Based on today’s scripture readings, it is not difficult to conclude that being happy and being a Christian aren’t always compatible.  Jeremiah rails against God because despite having done everything God asked of him; Jerimiah is a laughing stock and mockery to the people.  The psalmist pleads with God, “Surely, for your sake have I suffered reproach, and shame has covered my face."
Jesus says to his disciples, “Do not think that I have come to bring peace to the earth; I have not come to bring peace, but a sword.”  Jesus goes on to say that taking up the cross will tear families apart – not because Jesus is interested in breaking up families but because following Jesus will always challenge the allegiances we hold dear.
And finally, Jesus says plainly, “Those who find their life will lose it and those who lose their life for my sake will find it.”  C.S. Lewis once said, “I didn’t go to religion to make me happy. I always knew a bottle of Port would do that. If you want a religion to make you feel really comfortable, I certainly don’t recommend Christianity.” 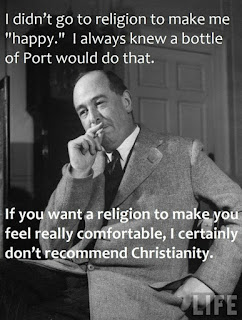 Sheep Without a Shepherd

I was recently asked if I believed in hell.  Like a good Episcopalian (or politician), I circled around the question for about 5 minutes.  I focused on the truth of God’s infinite goodness and mercy.  When I finally finished, he asked again, “So, do you believe in hell or not?”  I answered plainly this time, “I don’t want to believe there is a hell but can’t say that hell doesn’t exist.”
The purpose of this encounter is not to give you a treatise on the existence of hell.  Rather, I want to explore with you my answer to his next question.  The person followed up to my answer on hell by asking, “How do you motivate your congregation if you don’t hold up the possibility of hell?”
Now, I am not completely sold that Jesus doesn’t sometimes motivate us by fear of hell.  As we see later in Matthew’s gospel, Jesus does talk a lot about the weeping and gnashing of teeth and the outer darkness which I perceive to be a place on earth rather than a place of eternal damnation chaperoned by a devil with a pitchfork.
But today’s gospel lesson suggests that Jesus is primarily motivated out of a place of compassion.  Scripture says, “When Jesus saw the crowds, he had compassion for them, because they were harassed and helpless, like sheep without a shepherd.”  After Jesus instructs the disciples to proclaim the kingdom to the nation of Israel through acts of healing, he says, “You received without payment; you give without payment.”