In my preaching class at seminary, our professor emphasized that we should know our audience. Dr. McDaniel encouraged us to ask, “Who am I preaching to?” “What are their challenges?” “What are their strengths?”  “What are they hungry to hear?”  “What kind of admonishment might they need?”  “Are they the kind that will laugh at jokes?” (I added that one!)  I took my professor’s advice seriously because of the time I made a fool of myself as a chaplain intern at a hospital.
I was called to a patient’s room who requested that I read to her from scripture.  I asked, “What passage would you like me to read?”  She told me that I was the pastor and that I should pick.  Being the very learned seminarian that I thought I was, I looked up the Daily Office readings for the day.
The epistle for that day was taken from the fifth chapter of Galatians.  I began to read, “Listen! I, Paul, am telling you that if you let yourselves be circumcised, Christ will be of no benefit to you. Once again I testify to every man who lets himself be circumcised that he is obliged to obey the entire law…”
When I finally finished reading about the circumcision controversy, there was a brief silence.  As I struggled to figure out to relate circumcision to this woman’s illness, the woman looked at me and said, “How about you read to me from one of the Psalms.”  “Great idea!” I said.  And I read a few favorites from the psalter.
In today’s lesson from Acts, Paul finds himself preaching to an audience that has no grounding in the Jewish tradition.  He can’t rely on the same sermon he preached to Jewish audiences because this pagan audience doesn’t know the Hebrew scriptures.  Therefore, he can’t talk about how, Jesus, the long-awaited Messiah has fulfilled scripture.  Instead, Paul must learn about pagan culture and customs.  Paul must figure out what they hold sacred.
As Paul enters the city of Athens, a university town, he notices how extremely religious they are.  More specifically, the Athenians value an intellectual pursuit of the mysterious.   And trophies of their intellectual pursuits are littered throughout the city. (In all reality, the city might have looked a lot like the scene outside of Bryant Denny stadium in Tuscaloosa).  But the most curious idol in Athens is an altar dedicated ‘to an unknown god.’

Voice of Love, Not Fear

“The Lord is my Shepherd; I shall not be in want.”  Today, on this Fourth Sunday of Easter, the Church reminds her people that our Lord and Savior Jesus Christ, the King of Kings and the Lord of Lords is best described as a shepherd, as someone who tends sheep.  Today is what we call Good Shepherd Sunday.  Scripture says, “the sheep follow [the shepherd] because they know his voice.” 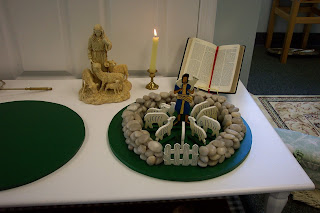 
Beloved, follow the voice of love – it is the only way through valley of the shadow of death – it is the way of the Good Shepherd who leads us beside green pastures and still waters – the way of the One who says, “Do not be afraid. I call you by name.  You are mine, always.  Hold on to the sound of my voice because I will hold onto you forever with a love that lives beyond death.”  Amen.
Posted by The Rev. Jack Alvey at 12:58 PM No comments: