The End of War?

Will We Ever See the End of War? 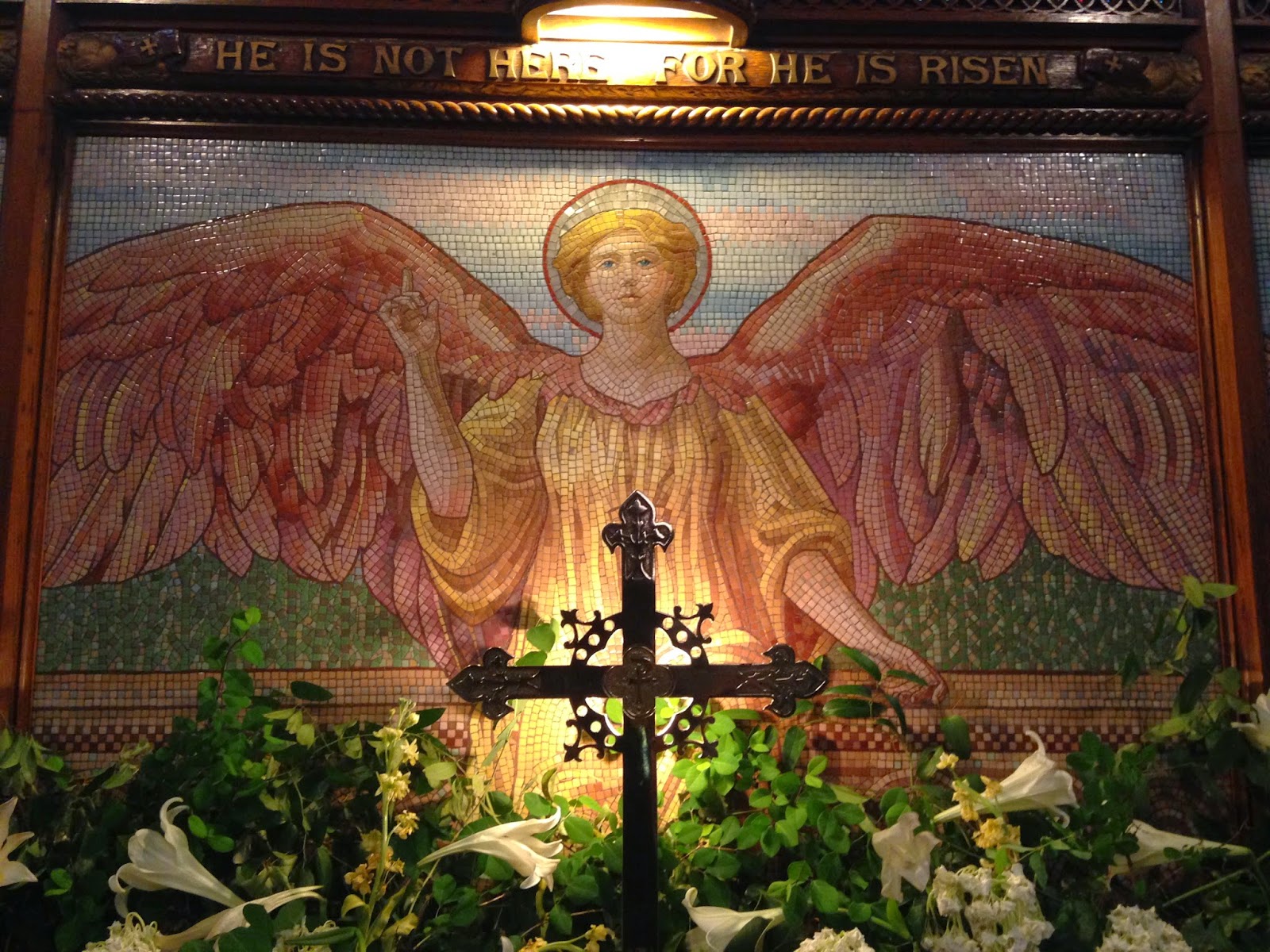 The good news that the angel proclaims also says that God’s permanent dwelling is not in this building.  God lives in our hearts and calls us to witness to the risen Lord beyond these walls.  So when you leave this place today, may your life be evidence that you worship a God who lives beyond the power of evil and death.  Amen.
Posted by The Rev. Jack Alvey at 7:42 AM No comments:

Have you ever watched a movie for the second or third time hoping it will end differently?  Hoping that the good guy will actually survive or win only to see the movie end the same way every time?  This is kind of like how I feel on Good Friday.  When I remember these events that took place some two thousand years ago in Jerusalem, a part of me hopes for a different ending.  Maybe Jesus doesn’t have to die.
Maybe Judas will have a change of heart.  Won’t Judas change his mind and decide not to betray Jesus?  Won’t he remember that the riches of God’s grace offer much more than the riches of this world?  But that doesn’t happen.  Judas brings a detachment of soldiers with the police, chief priests, and Pharisees.  They come with lanterns and torches and weapons.  They come to take Jesus away and sentence him to death.  Judas betrays the trust of Jesus and his friends.
Maybe Jesus will cheer Peter on when he takes out his sword and cuts off Malchus’ ear.  Won’t Jesus let Peter fight off the soldiers and police and lead Jesus and his disciples out of town under the cover of darkness?  But Jesus says to Peter, “Put your sword back into its sheath. Am I not to drink the cup that the Father has given me?”  The soldiers and police then bind Jesus and take him away.  Jesus doesn’t even put up a fight.
Maybe Peter will remember Jesus’ prediction of the cock crowing three times and change his mind.  Won’t Peter wise up and boldly proclaim Christ as Lord as he did so passionately before?  But that doesn’t happen.  Peter denies Christ three times.  Peter thinks only of himself.
Jesus has another chance to save himself when he stands before the religious authorities—the chief priest and the high priest.  Maybe Jesus will finally submit to the religious authorities.  Won’t Jesus just give in to the demands of the power hungry so he can go free?  But it doesn’t happen that way.  The only one whom Jesus will submit to is his Father in heaven.
But maybe Pilate will see through this power struggle.  Doesn’t Pilate see that the religious authorities have a weak case against Jesus?  But the religious authorities aren’t interested in listening to reason and logic—they are influenced by power and control.  And so is Pilate. So Pilate washes his hands clean of any responsibility and hands Jesus over to death at the request of the religious authorities.  Pilate surrenders his integrity for popularity’s sake.
But wait, maybe the angry mob will realize that they are out of control.  Won’t they see that Barabbas, a proven criminal, is the person who is really deserving of death?  Won’t they demand his blood instead of the blood of an innocent Jew?  But that doesn’t happen.  They shout even louder—Crucify him!  Crucify him!  The crowd wants a good show; they came to Jerusalem to be entertained. Not even the crowd will save Jesus.
Pilate sends Jesus away to be crucified and has the title “Jesus of Nazareth, King of the Jews” inscribed on the cross Jesus will soon hang upon, a title not even the Jewish elite accept. Meanwhile, Jesus’ mother Mary, Mary Magdalene, Mary wife of Clopas, and Jesus’ beloved disciple watch helplessly as Jesus’ carries his instrument of death to Golgotha.  Surely these people hoped the ending wouldn’t be like this either.  But even those closest to Jesus are blind to see that the will of God sees beyond death and the grave.
Jesus is taken to the Stone Pavement and crucified between two criminals.  He is crowned with a crown of thorns and mocked when they make him put on a purple robe.  In the end Jesus isn’t even spared the dignity of clothes as they are divided up among the soldiers.  And finally, before Jesus takes his last breath, he tastes the bitterness of the world that he came to save and is given a sponge full of wine on a branch of hyssop.  When Jesus tastes the wine, he says his last words, “It is finished” and breathes his last. The End.  The story of Good Friday ends this way every time. 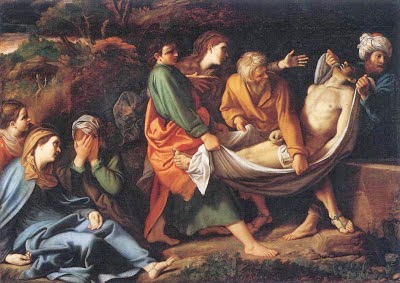 This question for us even today, even after the resurrection, asks, how could we call a story like this one “good.”?  How is Jesus’ death a part of the good news?  How can we call a day like today, a day when we remember how the world killed its Savior, “Good Friday?”  What good could possibly come from Christ’s suffering and death?
Now there are a lot of atonement theories out there, theories that tell us why Jesus had to die in order for the world to know life.  I am not going to get all theological on you this afternoon.  But there is something that I want to challenge you to think about and pray about over the next few days as we approach Resurrection Sunday.
Where do you find yourself in this passion narrative?  Where do you stand at the foot of the cross?  And where you find yourself today is probably different than where you found yourself last year.  Be honest because only when you are honest can you be ready to receive the good news.
In what ways are you like Judas?  What is it like to live with the knowledge that you have the capacity to betray not only your friends but also your Lord?  In what ways are you like Peter?  What is it like to be excited about serving God one minute but when challenged by your faith you retreat?  In what ways are you like Pilate?  What is it like to put your own convictions aside in order to please the people?  In what ways are you like the crowd?  What is it like to do the popular thing even when you know it is probably wrong?  In what ways are you like Jesus’ family?  What is it like to watch helplessly as your loved one dies?  In a nutshell, what is it like to live in the knowledge that you are a sinner?  What is it like to live in the knowledge that you cannot save the world?
I know these are hard questions to answer.  I know these questions stir up a lot of uncomfortable feelings.  But the good news is that our faith doesn’t leave us to spend our lives in the depth of despair and shame—our faith doesn’t leave us at the foot of the cross.  While the cross of Christ certainly reminds us of where and how we fall short, the empty cross is a reminder that we can live beyond our sin, we can live beyond our death because Jesus lives beyond our sin and beyond our death.  There is life beyond failure.  There is life beyond the grave.
But we will never understand this gospel truth if we can’t accept and acknowledge our sin and failure.  As long as we avoid confronting the hard truth that we are responsible for the death of Jesus, that we can’t save the world—even us fine church going people, then we can never join Jesus in life beyond the cross.  If we can’t admit that the story of Good Friday has to end with the death of Jesus, then we can never be a part of Jesus’ Resurrection story.
Good Friday certainly digs up a lot of bad news, but unless can we name honestly that bad news, unless we can accept the reality of not only our broken world, but also the brokenness of our own lives then we will never be able to fully accept the good news that God is making for us on the other side of the cross.  As Christians, we can call today good because in Christ God gives us grace to confront and name all that is wrong in our world and in our lives with the confidence that through the cross Jesus gives us the ability to live beyond it all.  Amen
Posted by The Rev. Jack Alvey at 1:53 PM No comments:

God wants to love you, not fix you

At the old chapel at Virginia Seminary there was a stained glass window depicting Judas’ betrayal of Jesus at the Last Supper.  The reason that the window was so remarkable was because it portrayed a very anti-Semitic message.  In this window, Judas didn’t look like the other disciples.  Based on some distinct facial features, it was obvious that Judas was the only Jew in the picture—not even Jesus looked like a Jew. 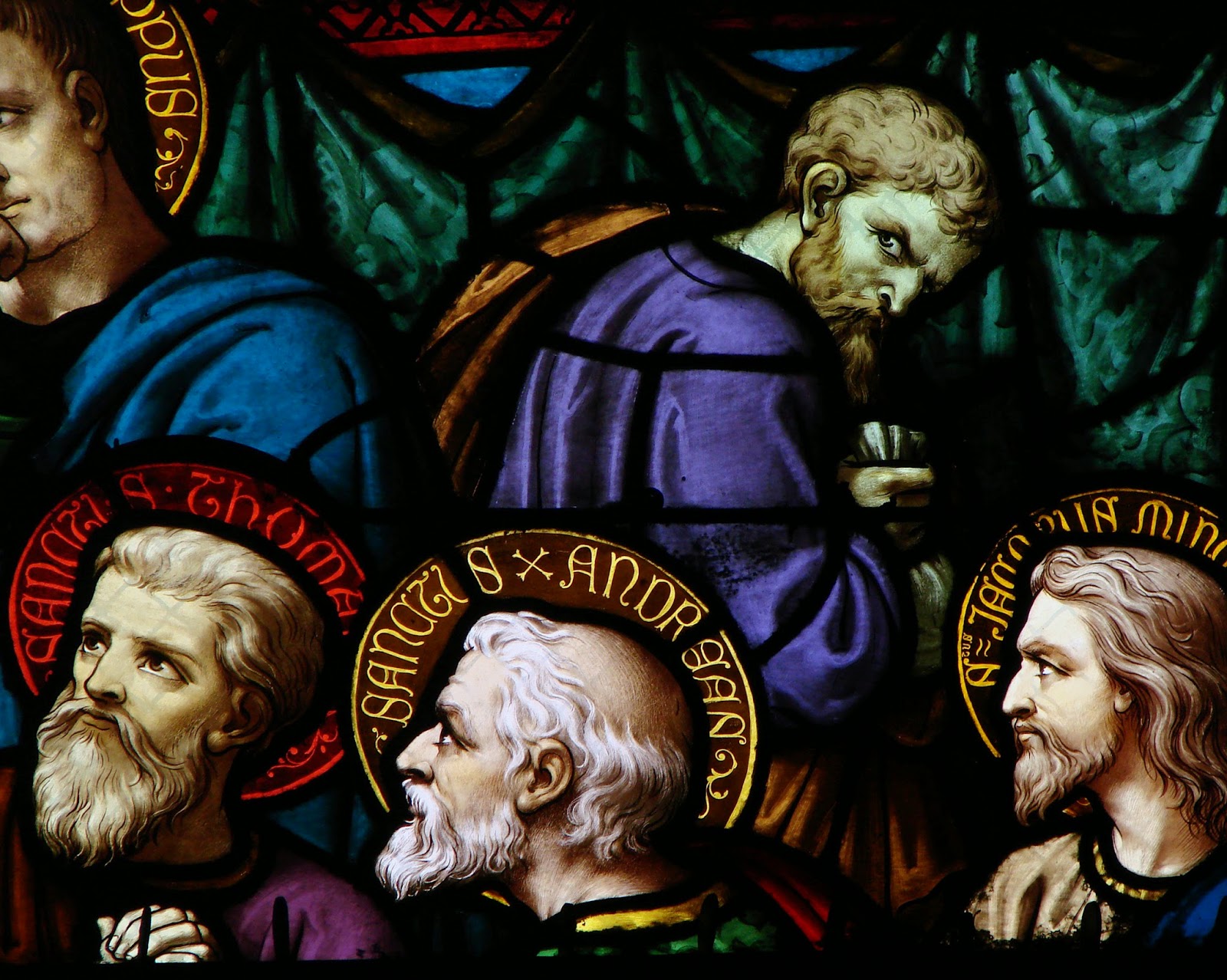 
When you approach this altar, instead of asking God how to fix the problem, instead of asking God to remove the painful memory of the past, try asking God to help you know how loved you are in spite of your sin and failure.  Ask God to remind you that through Jesus Christ you aren’t defined by who you fail to be.  You are defined by a God whose love for you is bigger than the painful memory of the past, bigger than your sin, and bigger than any fix-it project can offer.  May the power of God’s love in Christ transform you and make you a new creation in Christ Jesus our Lord.  Amen.
Posted by The Rev. Jack Alvey at 1:48 PM No comments: