Baptism as the Renewal of God's Dream

Recently, I went through a box filled with keepsakes from my past. In that box, I found a memory book from my sixth-grade year. The book included a section about what me and my classmates hoped to be when we grew up. And believe it or not, I did not put down Episcopal Priest. My sixth-grade dream was to play professional golf. Obviously, I am not a professional golfer. At this stage in life, I am barely a golfer!
We live a world where most of us, if not all of us, never realize our childhood dreams. Some of us saw our dreams shatter in front like a snow globe crashing to the floor – and there is nothing we can do to stop it. Some of us saw our dreams slowly slip out of our grip no matter how tightly we held onto them. Some of us saw our dreams stolen from us like a thief in the night even though we protected them like a hawk.
Life is filled with failure, disappointment, loss, and suffering – more than most of us would like to admit. The nature of human sin, the power of temptation, the forces of darkness, the fragility of this mortal life will eventually crush our dreams. And if we don’t realize our dreams, then who are we? If we don’t realize our dreams, what will we become?
In today’s Old Testament lesson from the prophet Isaiah, we hear God’s Word to a people who have all but forgotten their dream. The nation of Israel is no more, or, at the very least, scattered across the region. The chosen people of God are dispersed throughout the land held in exile by the Babylonian Empire.
Their identity tarnished forever – so they think. They wonder, who are we? What will we become? If you remember, they had once realized their dream when Joshua forged the way into the Promised Land on the heels of Moses’ leadership. They once had an identity as the people who would be a light to the nations. God blessed them to be a blessing. But now, the dream is all but forgotten.
The people of Israel rebelled against each other and God. They pursued the human dream of power and control instead of God’s dream of truth and grace. Again and again, God tried to call them back to their true selves but nothing stuck. And like a frustrated parent, God let his chosen people experience the consequences of their actions. God let Babylon crush the dream of Israel – even the dream of God himself.
But the God of Jacob is a God who keeps his promises. No matter how disgraced and dishonored the people of Israel, God has a plan to call them back to himself, call them back to themselves, call them back to God’s own dream for the world. In today’s poem from Isaiah, God tells Israel, “remember who and whose you are.” God says, “I have called you by name, you are mine.”
Isaiah’s prophecy tells the people of Israel that God’s dream for this world is still alive. However, as we see in Jesus of Nazareth and through his baptism, this dream will be fulfilled in a new way – a way that will stick. Jesus, a descendant of Israel’s house of David, will restore the image of Israel forever.
And not only that, Jesus will fulfill the purpose of Israel – to be a light to the world. Through Jesus, the image of all nations is restored. In Jesus, we proclaim a God who looks upon the whole human family with compassion and declares – you are my beloved children.
If I get the opportunity to talk with the godparents before a baptism, I tell them you have one job. Your job is to show this child that they are a beloved son or daughter of God – no matter what.  No matter what terrible names others give them, no matter what terrible names they give themselves, no matter what terrible names they give you or others – you remind them that they are a beloved child of God. You remind them of the promise of God.
And when you find this task to prove impossible, and you will, then point to Jesus – point to the one who restores the image of all people. As we celebrate the Baptism of our Lord, we celebrate a God who will go to every measure to show us that we are beloved children of God. As Jesus is baptized on the banks of the muddy Jordan River, we see a Savior who is willing to get in the ditch with us. We see a King who is willing to muddy his name by associating with the likes of us.
Notice that Jesus doesn’t do the baptizing. John the Baptist, hence the name, does the baptizing. Jesus gets in line with the rest of the sinners and outcasts. But as St. Maximus of Turin once said, “Christ is baptized, not to be made holy by the water, but to make the water holy.” In other words, everything that Christ touches is made holy – even the sinner and outcast – even you and me. 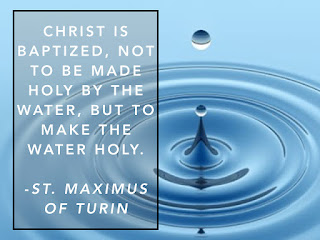 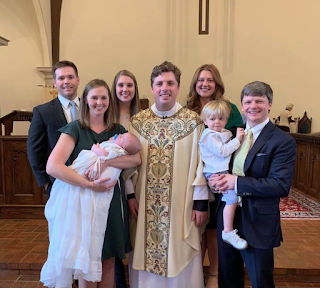 But on this day, through the waters of baptism, Hagen is initiated into a dream that this world can never take away – the dream of God. Through the waters of baptism, we are promised that all of us are a part of God’s dream in Christ. We are part of a dream that desires humanity to know what it is like to be loved and to love despite all the voices that say we or they are not worthy of love.
And in the end, we pray that God will give us the grace to see there is no us and them. There is only we – for Christ Jesus came to break down the walls built by human sin, by the power of temptation, by the forces of evil, by the fragility of this mortal life – all things we denounce in the baptismal covenant.
In a few minutes, we will also remember our own baptism by saying the baptismal covenant. We will reaffirm our faith and re-commit to promises we have said many times before. And if I had to distill the covenant into one sentence, I’d recall the words of the preacher Barbara Brown Taylor, “We are called to know the world is not the way it should be but to love it the way it is.”
We don’t live in a moral vacuum and neither did Jesus. In a world broken by sin and death, there are no right choices. At most, there are only the best choices, but even the best choices fail us or others, even the best leaders fail us or others. If the villains don’t wreck it, the heroes will. People are messy; relationships are messy; expect messiness.
Beloved in Christ, you can also expect grace. You can expect God in Christ to touch the many nightmares of this world with a love that reminds humanity of God’s dream for all his children. You can expect God in Christ to touch all that is broken in this world with a love that makes all things new. You can expect God in Christ to touch all that is profane in this world with a love that makes all things holy.
And why exactly should we expect God to do this? Because it is the Lord our God who says, “I have called you by name, you are mine…You are my beloved daughters and sons.” This is a promise and dream you can count on. Amen.
Posted by The Rev. Jack Alvey at 1:23 PM No comments: