On Pentecost Sunday in 2015, I preached a sermon entitled “Pentecost Challenge.”  In that sermon, I said, “I am going to challenge you to grow beyond how you have already grown…I want us to have a sister-church. Our primary goal will be to develop a relationship with this church and let the Holy Spirit take care of the rest.”  I said this keeping in mind the gospel truth that the vocation of the Church is to witness to how God is reconciling people from all races and cultures by the power of the Spirit.
Over the course of the next few months, several of you expressed excitement about the possibility.  Some of you even named a few churches to consider.  In 2015, the Vestry, at a planning weekend, formally voiced a desire to pursue a companion church.
Earlier this summer, I found myself sitting next to Otis Dion Culliver, Senior Pastor at Tabernacle Baptist Church, at the Mayoral Forum at Selma High School.  We immediately started connecting on many levels and decided to schedule a lunch.  After our first lunch together, we made a commitment to meet for lunch often and we did.
At our last lunch, we made a commitment to include our respective parishes in the prayers on Sunday.  Pastor Culliver also indicated a desire for us to worship together.  On Sunday, November 27, members of St. Paul’s worshiped at Tabernacle Baptist and we were received warmly.  Pastor Culliver plans to bring a delegation to the 8 o’clock service in the coming weeks.  And I have no doubt that we will be just as gracious in our welcome. 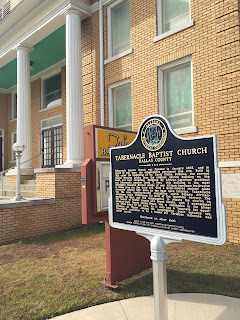 In addition, both of our youth groups will team up on Sunday, December 11 to eat lunch together and go shopping for the Salvation Army Angel Tree Project.  We both agree that the work of the gospel bears the most fruit when we follow the lead of our children.  As the prophet Isaiah says, “and a child shall lead them.”
I believe this companion relationship is incredibly timely especially as we see racial tensions escalating around the country.  My hope and prayer is that this relationship will provide both healing and inspiration to our community.  We will have the opportunity to offer a remarkably different narrative than we are used to seeing in the community, nation, and world.  The good news is that this different narrative is already made known in the redemptive story of Jesus Christ.
This part of our country’s history is too often marked by division, hate and suspicion.  God is giving us the opportunity, through this partnership, to speak to a history that is marked by the saving power of God’s love in Christ, a history that is marked by unity, understanding, and mutual respect.
I invite your continued prayers for this companion relationship.  Please don’t hesitate to let me know if you are interested in learning how you can be a part of this partnership.  And thank you for your continued willingness to step out in faith for the sake of the gospel and for the sake kingdom of God in our midst.
O God, who created all peoples in your image, we thank you for the wonderful diversity of races and cultures in this world. Enrich our lives by ever-widening circles of fellowship, and show us your presence in those who differ most from us, until our knowledge of your love is made perfect in our love for all your children; through Jesus Christ our Lord. Amen.  (BCP, pg. 840)

Coronation of Christ the King

On June 2, 1953, an estimated 23 million watched as Queen Elizabeth II was crowned at
a coronation ceremony at Westminster Abbey in London.  8,000 were in attendance at the abbey.  Most of the guests were other royalty and dignitaries from around the world.  An estimated 3 million were gathered in the streets of London and another 20 million watched the BBC broadcast that was aired in 44 different languages. 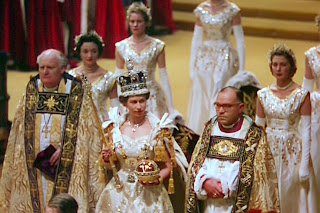